This month both GATE 7 and Drug & Drop are on a break, and while this doesn't seem strange for Drug & Drop (since the last chapter was published last month), it certainly seems strange for GATE 7.

GATE 7 has been on a break since March and the last chapter that was published was an omake (not an actual chapter).

If you check GATE 7's information on the "CLAMP camera" app, it says that the series is currently on hiatus: 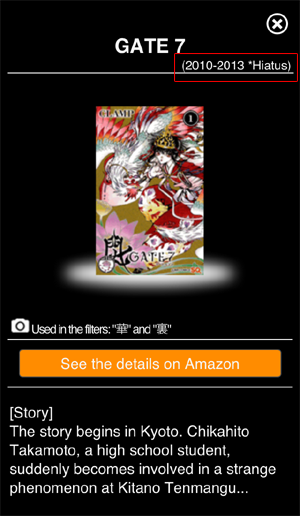 But strangely enough, if you check CLOVER or X's information, it doesn't say they are on Hiatus. GATE 7 is the only work with that information.

Additionally, the introductory text about CLAMP on the app states that XXXHOLiC and Drug & Drop are the only two active series that CLAMP are working on: 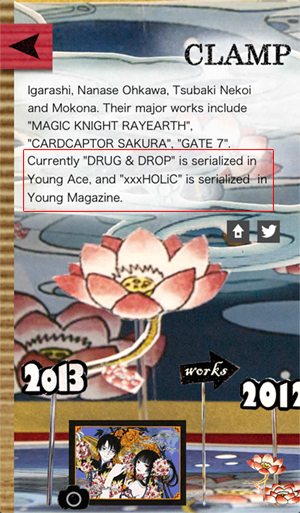 To make things even more suspicious, the official twitter account of CLAMP is no longer following Shueisha or JUMP SQ's twitter accounts. On the other hand, GATE 7 is still listed as on the series being published in JUMP SQ: http://jumpsq.shueisha.co.jp/rensai

Just earlier this week, both Ohkawa and Nekoi went to Kyoto on a business trip, which I believed was for taking more pictures and doing some more location hunt for GATE 7, but I am unsure if that was indeed the real purpose of their trip now.

There hasn't been any official announcements from either CLAMP or Shueisha concerning GATE 7's status. The last chapter published in March informed that a new chapter would be published two issues later, but it's been postponed indefinitely since.

A lot of people were worried, specially all the GATE 7 fans out there, so I made this post in order to shine some light on this matter.